Join us on our Sharkaholic week with many shark species in Cape Town. Dive with the Great White Shark, Blue Shark, Mako Shark, 7 Gill Cow Shark and much more.

Season: Feb to May

Season: Feb to May

This holiday package is a stunning combination of diving and viewing the most awesome sharks in the cape waters! Join us for 6 days of stunning trips and dives with Great White Sharks, Blue Sharks, Mako Sharks, Sevengill Sharks, Gully Sharks, Cat Sharks, Shy Sharks, Pyjama Sharks and Cape Fur Seals.

With over 100 species of sharks in the waters around South Africa this is truly a mecca for shark diving!

Not only will you see spectacular marine life but we will also show you the Cape Peninsular, the Big 5 at a local game park and also visit an ostrich farm.

On this expedition, we take a minimum of 4 people and maxim of 8 people (unless in a group of max 10)

Shark Species You May Encounter

We will be going out the Seal Island in False Bay early mornings to look for Great White Sharks around the Island. This is a little early for hunting activity and breaching but we will try our best to entice a Great White shark to hunt our fake ‘decoy’seal that we will tow behind the boat. We will anchor up at Seal Island then and chum for the sharks, once the Great White sharks arrive we will drop the cage into the water and enjoy a close encounter with the Apex predator of the oceans.

Blue Sharks are found offshore from Cape Town and we will launch from Simons Town in False Bay and head out to the deep blue approximately 30-50km past Cape Point. Here the water is very deep at approximately 500m but this is the zone where the Blue & Mako Sharks are roaming. We will continue offshore from Cape Point until the water started warming up and turning blue. From Cape Point the water will be fairly murky and green and as we go out we will start to hit the warm Agulhas Indian ocean current. Once we are in this current the water will clear, some days into a deep blue with up to 50m visibility! Once we are in the Zone we will start chumming and wait for our first sharks to arrive. Once they arrive we will first slip into the water on snorkel before kitting up for an hour long dive with these beautiful and curious sharks.

Mako Sharks are know to the the fastest shark in the ocean and from experience it is like meeting the roadrunner in the water. The sharks are extremely fast and twitchy and one minute there will be nothing and then you will turn around and they are right behind you. It is slightly unnerving but the sharks are also cautious of the divers and with safety divers in the water and by following some basic safety rules then we will be able to safely enjoy a positive diving experience with them.

The Broadnose Seven Gill Cow Shark is very special. Millers Point along the Cape Peninsular is the only place int he world where you can consistently dive with the ancient sharks throughout the year. We will take you to the hot spot in a protected marine reserve to show you these fascinating animals which can be in numbers of 30+ on a single dive. This dive is a simple 10-12m dive in the stunning kelp forests close to Simons Town.

We will visit a local colony of Cape Fur Seals just after our 7 Gill Cow Shark dive. Know as the dogs of the ocean and extremely playful and curious this is a fun and memorable dive.

Other possible species sightings on this expedition

You will be met at the Airport and transferred through to Simons Town to your accommodation. You will spend the day at your leisure in Simons Town and depending on your arrival time should have time to visit Boulders beach Penguin colony just down the road.

● 7am breakfast to go, meet thew crew on the pier
● 7:30 head off to Seal island to meet the white sharks
● 12:30 return to Simons Town Harbour
● Afternoon at own leisure

● 7am breakfast to go, meet on pier
● 7h30 head to Seal island to see more White sharks
● 12h30 return to port
● afternoon at own leisure

The full day Big Game Safari is at a luxury Private Game Reserve. The reserve is a 2 hour drive from Cape Town and also includes a trip to an Ostrich farm. At the reserve you will see the Big 5 although this is not Kruger or safari country so don’t expect lion kills and big cats hunting.

Itinerary for the game drive: Arrive at the lodge and enjoy coffee & cake. Depart on a 2-3 hour game drive with an experienced game ranger. The reserve also works as a conservation base for Cheetahs and you will visit this. A Full buffet lunch will follow before returning to Cape Town along fantastic scenic roads.

Airport drop off between 12h00-14h00 (unless otherwise arranged) 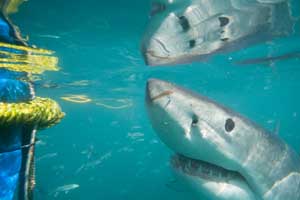 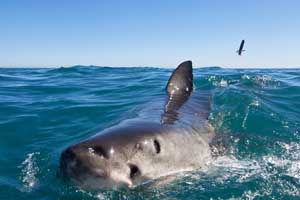 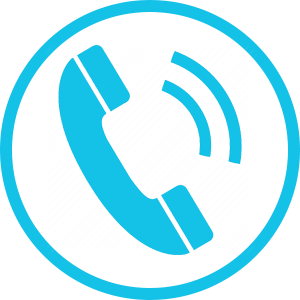